SBAE was developed in the early twentieth century when the United States was in the midst of an agricultural and rural transformation, education was compulsory through age 14 and the daily farm labor salary was around $2 per day (Stimson, 1919, p. 454). Its success in the United States spawned replication around the world for much of the last century and, today, still offers a blueprint for international agricultural development.

In 1901, Rufus Stimson, the 32-year-old president of the Connecticut State College of Agriculture (now the University of Connecticut), began to notice the need to connect agricultural research to farmers. Stimson, a graduate of Harvard and Yale, a philosopher and a professor of English language and literature (Sorber, 2011, p. 285), seemed an unlikely agricultural prophet. Works of Socrates, Rousseau, Pestalozzi, Froebel and Herbart occupied a prominent place on his desk. Yet, he had also studied under William James (Lanthrop and Stimson, 1954, p. 585), whose pragmatist philosophy dictated that everything be viewed in terms of its practical use or success (James, 1943). Prior to Stimson, many agricultural researchers saw agricultural science as an end of itself; Stimson’s philosophy led him to believe that agricultural sciences not applied to farms were wasteful. To rectify his belief, he needed a way to build scientific knowledge for practical agricultural research and deliver its findings to farmers. Stimson (1946) proposed a twofold idea:

“(1) an adequately supported central source of trained men and experimental data, and (2) an inexpensive service system operating through local schools.”

In 1908, after seven years of building the capacity for agricultural training and experimental data at Connecticut’s land grant college, Stimson resigned to become a high school agriculture teacher at Smith’s Agriculture School in Massachusetts. This position enabled him to test his hypothesis that students’ agricultural home projects could diffuse that research onto family farms. Before Stimson, vocational agricultural education in secondary schools had been limited to large boarding schools with capital-intensive school farms. Stimson found these schools to be impractical for education, relevance and scale. His solution was to create an agriculture department in every rural secondary school, allowing home projects to serve as the practical component in a student’s agricultural education. In this way, students would work closely with parents, learn agricultural skills and earn money (Lanthrop and Stimson, 1954). 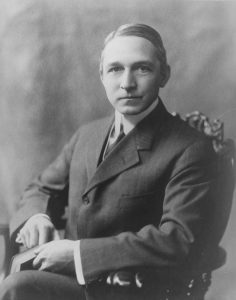 Students chose home projects that were important to their agricultural interests. Projects had to be productive rather than experimental – “learning and earning” was essential to the pedagogy. Because of its productive value, the student and teacher were able to engage the interests of adult farmers within the community (Stimson, 1919, p. 37–38). An editorial in The Outlook magazine, published in 1917, called SBAE a great unifier that “brings the school and the home together; the teacher and the parents together; education and life together” (Abbot, 1917, p. 473–475).

While SBAE programs reach several million students in the United States each year, the scale and growth of SBAE have been global. Prior to World War II, similar programs emerged in places such as Canada, England, Australia, South Africa, Scandinavia and Eastern Europe. In post-war Japan, SBAE and the Future Farmers of Japan (FFJ) were established during reconstruction; similar efforts were made in post-colonial Korea. In subsequent years, the United States Agency for International Development (USAID), the US Peace Corps and various European aid agencies expanded SBAE programs around the world, often using former 4-H members, Future Farmers of America members or agriculture instructors to lead the efforts. Programs were established across Latin America, South Asia, and East and West Africa. In the 1950s, programs took root in Kenya, Ethiopia and Liberia (Stimson, 1946; Wessel and Wessel, 1982; Connors, 2013).

Menu
© 2020 The Movement for School-Based Agricultural Education. All rights reserved